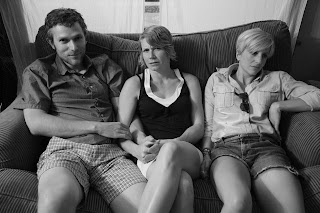 The bi-annual trip south that many a sponsored climber or wanna be sponsored climber take each year to the Outdoor Retailer show has never been on my to do list. The idea of wasting my own money to go and “work it” has had very little appeal to me despite the efforts of friends telling me the importance of personal meetings and that I should view it like going to a conference and that really, it would be in my best interest. In my opinion it was the math and time that mattered and thus I didn’t see the point. Besides, if a resume is handed out it should speak for itself. The little will and ability I had to put into selling myself made me wriggle like a can of uncomfortable worms and besides, I hate job interviews. Another point to argue for not going was the scene. I had visions of being in a crowded room with people who would do anything to get something for free while acting like someone else while I secretly would drop a reality pill in their freshly open can of red bull and talked to them about the importance of sincerity and transparency. But perhaps that’s a bit harsh and judgmental. Everyone is different and has their select path. After all, what I see or imagine I see is often obscured by my own judgments, fears and past happenings and so therefore isn’t always what is. 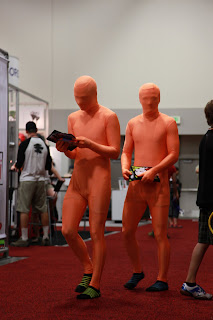 And so the trade show… what is it all about anyway? It’s always interested me to a point. To know what happens, who’s there, what draws so many climbers to it. Is it as much of a scene as its reputations holds? Well you can’t very well be a bystander and directly experience something at the same time. Wondering doesn’t help either. Coincidentally (or not!) it happened that the timing of the trade show synchronized with my trip to Colorado and more importantly, I couldn’t possibly pass by SLC without visiting my handful of heartfelt friends who I just wish would move into my van with me.

And so after a few emails, I got myself a pass into the show and tried to view going as an opportunity instead of the porn that I had envisioned. As soon as we went to past the guards wearing orange vest, we were quickly stopped. Apparently 4 year olds also have to pay their own way in to this mega event. My dear friend Justin took over from that point and we were quickly whisked past the two old guards and thrown into the abyss that lay below. Justin continued to walk with us, understanding my intimidation. He helped by ‘holding my hand’ so to speak so I could brace myself for the hordes of people which I had imagined. He gave us a detailed tour to an event he was well familiar with. We walked past booths which resembled jungles from the outside to elaborate ones bathing in blue with flowing waterfalls near each entrance.

If anyone doesn’t know what the purpose of the OR show it is this; to show and sell merchandise and new products to retail stores and businesses. And so in order to entice buyers to your booth and product, many companies will give out samples of product or treats such as mini chocolate bars and a glass of wine. There were people walking around dressed as aliens and purple snowmen, to women wearing just a bra and panties.  Really, anything goes to sell a product. This was a major perk of going to the show. I got myself enough Probars to last a good few weeks rationing as a squirrel does. 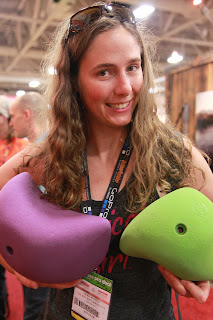 After my first day of the show, my opinion and view of the show (and the people) had switched from assumption and judgment to openness and realizations. Sure there was the random person there who I had imagined littered the place but really the show was a place where climbers (and other athletics) went to improve their relationships with their sponsors and in the meantime see tons of friends. I didn’t do much “business” while there, but I did get samples of lots of food, met some new people and put faces to some names. I also got to check out the premier of “the scene” and a few other films as well as be awed by the amazing strength and endurance of swiss climber, Ueli Steck. Mountaineers do not usually inspire me but man, that guy is a number one bad-ass.

After I got over the initial shyness and intimidation of the whole thing, I found myself enjoying it and socializing with people who I had met and climbed with through the past years. Having them all in one room was a mega bonus! One particular person I meet was a fellow named Rusty. Paraphrasing him, it’s a rare chance to meet someone who impacts and inspires one to be a better person. To help them see things as they are, how ones thoughts, habits and wants (positive or negative) can shape their very life. Just by asking me a few questions whose answers I am still pondering; my time spent with Rusty was inspiring and with all bullshit aside, completely and unconditionally at the basis of why we are really here.