The air was warm, fresh and clean as were the roads and transpiring landscape. The trees were increasing in density and the size of the mountains was steadily rising as we headed south from Wyoming. We had finally arrived in Colorado after a long drive from Squamish. It was the first time I left Squamish in the summer for an extended amount of time and it was the first time I had been to Colorado. I had little expectation on what to do while there but I did know that I wanted to experience something new, something different from my normal day to day activities.

I knew little about the climbing give or take a few select problems that anyone with any bouldering knowledge would know of but I was familiar with horror stories about the hiking. I also had anticipation about the scene that took place in this state which some may refer to as obnoxious, trendy, competitive, loud and full of spray. Well, I was to learn a few things during the month and a half there…

First of all, the rumors about the hiking proved true. It is a bit insane how much these people hike to go bouldering. On average 2-3 miles there, times 2 for the way back, equals a 5-6 mile round trip hike! Then there is the elevation. The park is roughly at 10,500 feet while the highest spot we went to, Lincoln Lake, was over 12,000 feet. I felt my heart was going to explode into my lungs which were fighting for their own survival. Carrying a pad stuffed with enough water, food and clothes, not to mention the essential toys and camera, for a full day, my legs and back felt like I was in training for Everest.  I tried to save on weight by not bringing the highly recommended rain jacket only to learn the lesson after experiencing two days where we got rained out by afternoon showers which continued to last the whole day. Then there is Cedar. Anyone with a kid hoping to go to Mt. Evans or the like not only has to bring the extra gear but also a fellow by the name of Kevin Cuckovich or someone with similar brute strength to give the little one a ride on the shoulders. Without this extra help I fear I may never have gotten out anywhere besides the local areas in and around Boulder. That said, after a few weeks she was able to hike up to lower chaos on her own and out hike me; an easy accomplishment. 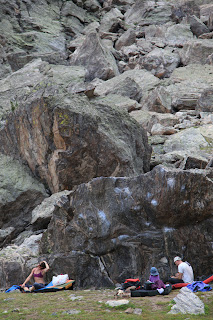 The first part of our trip was spent with our good friends the Strong’s who were kind enough to take it easy on us and stick to lower chaos on our first day despite the slimy conditions. Even softer on us the next, we went to Endo Valley, a hike which I was much more accustomed too. However, the third day we let them decided and upper chaos it was. Seeing as much of the rock in the area was my overall goal, but it is fair to say that we never did go back there!

According to the locals, Area A was meant to be the worst hike around because you hike uphill on the way there and uphill on the way back. It was long but also fairly mellow and I found myself enjoying it. The combination of the trees, greenery, rock, landscape and lack of tourist made this place by far, my favorite area in Colorado. The style of climbing was something I was a bit more familiar with and I thoroughly enjoyed it. Of the two days spent in this area, one was with Brian Capps and lovely Jeannie. This day we did something out of the ordinary for most Colorad-ians. We tried 5 problems in, get this, ONE day. Tome this is totally the norm. However in these parts things are done a bit more differently. The shortage of easier lines seems to have encouraged people into the habit of warming up and going straight to their project. That is it. The locals also seem to just spend half days out, leaving around 1-2, drive for an hour plus, hike for an hour plus, warm up, project and then reverse. When I realized this I asked ‘really? that is all they do here’? It was somewhat shocking to me coming from the land of long days out climbing and circuiting.

After the first 3 weeks the showers became less, the conditions improved but the climbing partners became few and far between. Despite the fact that we were now staying in Boulder, where every person out of 4 is a climber, finding climber partners proved a real chore. Finding the motivation to go up to any of the alpine areas with just me, Cedar and a pad was not only unmotivating but also unpractical. Cedar would need to be carried at some point and with a pad stuffed with our crap, it would have been too heavy, and not to mention the need for spotters at virtually any of the problems I had in mind. So, that said, the majority of the rest of our trip was spent between climbing at the Spot and going to some of the more local areas with either Tiffany or solo with Cedar. These days too proved a chore. Trying to find problems from a guide book that gave the wrong directions in an area unfamiliar to both of us resulted in bushwhacking and little to no climbing. In the days where we did find partners to go further afield epics seemed in our favor. Somehow I managed to forget my crash pad on the street in boulder which also had our extra clothes in it. On another day, upon driving half way to Mt. Evans I received a text from my friend who was bailing due to a hangover from a recent wedding.

The resulting gym climbing to satisfy my climbing desire was not a bad thing. Gym climbing for me is a treat and I can confidently say that my outdoor skills do not equally transpire to my gym climbing abilities. The saying where you put your energy to holds a lot of truth. In an effort to improve my gym climbing style I decided to attend an adult training session at the spot. As I desperately tried to finish my set of burpies and mountain runners, Shannon shouted at me to keep going. I looked on in disbelief. Was this really happening? Do people really do this on a regular basis and for fun?! I looked back at Shannon in amazement, I tried to go on but the urge to vomit increased with every effort. My arms felt like lead and I was sore for 5 days. After this humbling and enlightening experience, I realize gym climbing has its perks. First of all, it’s fun. Second, it makes one strong, really strong. This was to be displayed to me again a week later as I randomly entered a comp fully unprepared but ready to be humbled. And humbled I was. I managed to make finals but the winner was an impressive 13 year old girl who trains 5 days a week with the amazing and inspiring Robyn Erbesfield-Roboutou as her coach. With logic I know I shouldn’t judge myself too harshly for my performance, something I would have done had this happened 6 years ago. I don’t climb inside much nor train much and I don’t have a coach. But besides my performance I did have a weird sort of nerve racking fun, I learned some and was inspired. From this experience another opportunity was brought forth: to be on the local radio station with local crusher Nina Williams and Arno Ilgner. That in itself was a slightly entertaining experience.

Boulder is known for being home to many a strong climber. I had the opportunity to meet some of them, climb with some of them and also witnessing top Europeans climbers display in ninja style much slaughtering. Despite Boulders negative reputation, I found myself enjoying my time there. Although climbing partners were scare, I enjoyed the gym time. I found motivated people who were full of training knowledge that I never knew existed before. I also met many people who were actually, really sincerely nice and who made me feel quite at home! On top of that, the time spent at Jackie’s (who kindly welcomed us into her home with open arms) was full of fun filled activates: baking, puzzle time and ball room dancing, not to forget the thrift store invasions and time out with Tscholt. Although I didn’t find myself overly psyched for any particular problem I did thoroughly enjoy my time there and look forward to my return.

My advice for anyone wanting to see if boulder lives up to its reputation:  Go without expectation in all aspects and be ready to embrace all the sweat and tears that you may encounter. The hiking, altitude and climbing itself is not as easy as it looks. Don’t expect good weather or to find reliable climbing partners! Bring your own if you can! Take what you see and experience and make your own opinion from that. Be prepared to get fit and to make the most of what you find.
Besides, Boulder has earned an aspect of its reputation for a reason! 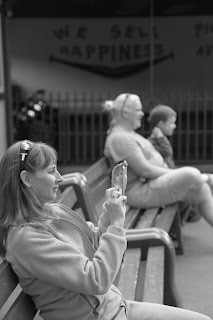 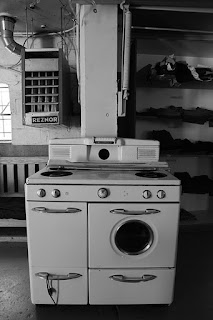