When I finished writing my last post I realized I had said very little about climbing. Maybe this is a good thing as i find talking about climbing and especially, what one has done in terms of climbing generally not that interesting. Surely there is a way of speaking about climbing which can take in all of the aspects besides that of simple achievements. And so, I try to speak about climbing… 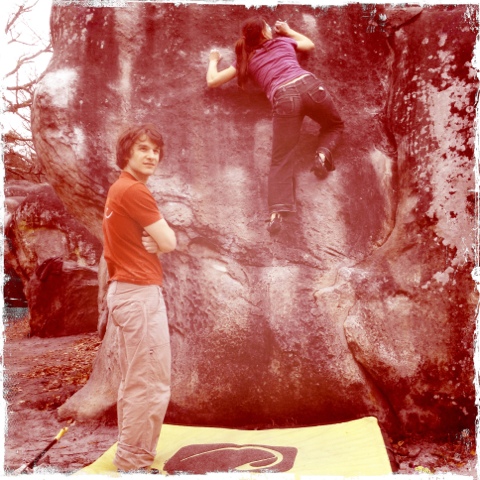 Before the death of my van I can say, yes, I did get to go outside when weather permitted which unfortunately wasn’t too often since it was the wettest and coldest winter since the 1960’s. I was restricted to what I could try with one pad and a six year old spotting so circuiting and one pad problems became my best friend. The old sense of feeling alone in my european adventure knocked at my door many days as I watched large groups of people walk towards the boulders laughing and smiling. In retrospect, I guess I could have tried to be more outgoing and speak to them but I guess a part of me got used to the way thing were and besides, approaching people was something I had done numerous times already and well, when clouds loom, it sometimes feel that they may never part and I didn’t feel up for the chance of rejection.

One of the days when I was circuiting with cedar I was trying red number 25 at Roche Aux Sabots. This is one of the most technical prows that I had encountered requiring one to stand on the typical polished smears followed by equally polished slopers. After falling near the top numerous times I was near done but decided to give it one more go which resulted in me falling and hitting my heel very hard on the rock which was next to my pad. I cursed to myself and the world for not giving me a spotter and friend to climb with for what had at that point, seemed like an eternal situation. My heel hurt for the next 2 months and without travel insurance I vowed from that day on to keep what I try to a limit.

Shortly after that, my van died. Most of my climbing adventures were then spent behind closed doors among the psyched crew of blocAge which I will admit, have been some of the most memorable and fun. Not knowing much about training I put my energies towards writing myself a program with the help from a couple of people and reading lots of conflicting information on the internet. Writing a program proved easier said than done. My mentality was that of CS Fletcher who says that those who believe in overtraining are woosies who are afraid of a bit of work. But from last years experience of being plagued with injuries i knew better. All the same, I wanted to get stronger and stay injury free. I put together a 3 month program which followed the ideas of periodization. A good base, later some strength and then conversion. I was set! With font as my backyard and Paris gyms not far, I could climb at blocAge for the days when I couldn’t travel. Unfortunately the death of the van put an end to these ideals except for blocAge and random excursions into the forest with people who were willing to pick me up.

For training I found myself lacking a lot of necessary training equipment: no campus board, no hangboard, and a mere 14 kg of free weights to work with. On top of that, the problems and holds were nothing like those at the comps. Working with what I had, the first month and a half were spent getting better fitness and general conditioning. I tried to set WC style problems but not only is that in itself a work of art needing mastery, it’s even harder with the holds that i had available.

In late February a campus board and a handmade hang board were put up and though both were not ideal, again, i worked with what I had. I got into the habit of recruiting training partners so I wasn’t always alone. Farid got psyched for stronger fingers and soon enough Fred made some rings. Maille a strong guy from the france team often joined me and though I pried, I tell you, the french don’t give out their secrets easily!

For me I discovered I loved training. The feeling afterwards of having pushed your fingers and body so hard made my whole being feel exhilarated. I had written down ‘Beginners mind’ on the Gullich when my campusing wasn’t improving and noted to remember to enjoy the process when things felt monotonous. Overall I felt I had a good thing going and I continued to learn more about training and adapted my program to the new information which may or may not have been a good idea. As comp season got closer I got some delayed responses to the questions I asked months ago and in a panic i changed the exercise base of my program once again which was a bad idea. I ended up hurting my shoulder from doing too much of a good thing with a bit too much psych and had to take a step back.

So overall my training wasn’t optimized like i had wished but I did what i could with what i knew. On a positive note, I gathered enough information for the next round, so hopefully i will be set with a proper gym with the specific comp style problems and a optimal program. Which will of course have a backyard littered with amazing boulders…

Rocks. What about them? 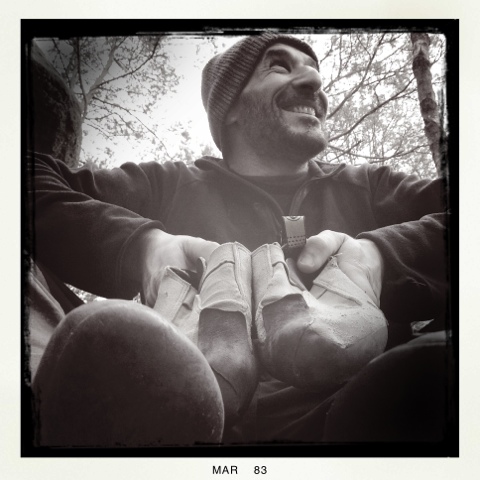 Being carless in Font where the boulders are spread out in all directions isn’t as dreamy as it may sound. The typical day was spent waiting for friends to contact me or I contact them. If they climb at a place near arbonne la foret where i was staying such as Bas cuvier or Isatis, a pick up is received with gratitude. Otherwise, if a pick up is a detour (understandable), I sit in a festering slump of pity for a few minutes but then i close my eyes and remember… ahh, BlocAge… Ok. Not all is lost. Breath. Look up. You’re alive.

I will admit at moments it has been complete mental torture especially on the rare sunny crisp days. Maybe I am an over emotional being but days when people are trying things that sound like candy and I can’t join them, it feels like my world is falling apart right before my eyes. My freedom to go to A and B has been dismantled. It’s days like these that FORCE me to be positive or the festering slump will swallow me up and take me into its abyss under my own permission. And some days that abyss has succeeded. Other days I pop out of it like a fully wound up jack-in-the-box. As Sandra would say: “You’re not dying…” 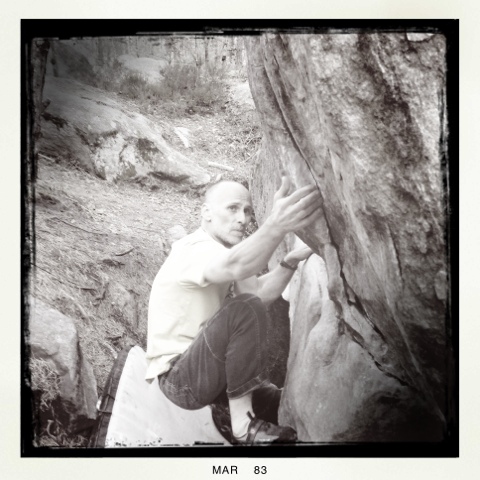 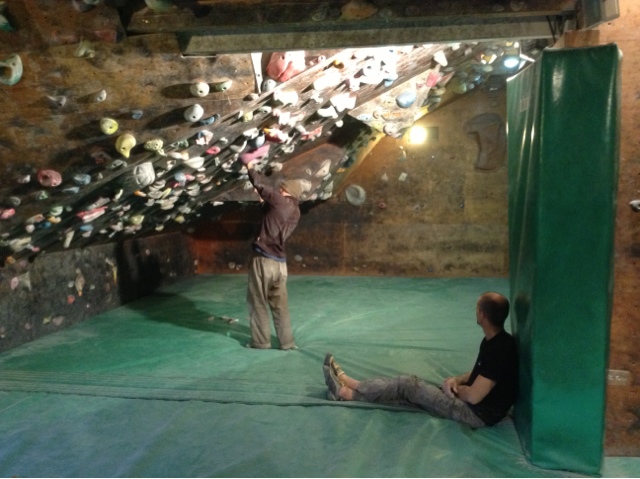