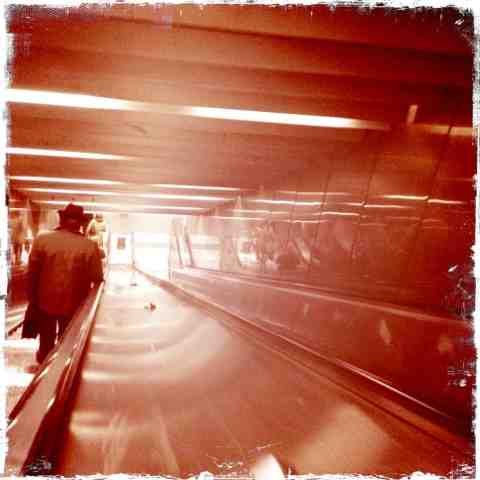 But i knew this. Yet i didn’t take what seemed then like a gigantic leap to change my situation. I can fairly say that my lack of transportation really limited my choices. There was BlocAge or BlocAge… I wasn’t close enough to the train without having to ask for a ride and I didn’t want to be a burden.
Millau left me feeling like all the training that i had been doing was in vain. After problem one which I was stupidly close to finishing but my nerves wouldn’t let me relax enough to think about what I was doing to make the final match, i started a downward spiral that i felt powerless to stop. At problem two a gigantic sloper that i had never meet before handed me my ass. It was like wrestling something which had nothing to grab, no hair to pull. I distinctively felt embarrassed to be out there and lived the feeling a kid in a play would feel when they forget their lines on stage. I wanted to disappear at that very moment. Besides feeling like a bit of a joke I also felt that old feeling return that comes ones way through failure and on top of that, public failure. Why should I care what over people think of me? I shouldn’t, but of course to an extent, I do.
Trying to gather an ounce of confidence and positive energy from deep down in the well that seemed dry I felt my legs shaking on problem 3. Problem 4 lead me into a tunnel that narrowed down to changing my footwork instead of my hand sequence. I thought of trying other methods but I wasn’t having it. Later i silently slapped myself as i watched people try the beta which i had shrugged off.
Before problem five as I was siting in isolation i almost broke down into tears. I really didn’t want to go out there. I realized how little mental preparation I had done to prepare my head for these testing and complex situations. I wondered what was I doing there? Why am I putting myself in this situation if failing makes me feel so shit? Why did i do so little to help what i call, ‘my gym comp thing’? Why didn’t I go to Munich where there are proper comp style problems in a plenty and a perfect campus board? I mean really! If I was going to train for these comps, that meant climbing in a suitable gym and preparing myself mentally and physically for them! That said, i don’t regret my winter stay in font. I had a great time, met some amazing people who I can call family and learnt some French. But I am beating myself up for not having prepared smarter. It’s the way i roll sometimes. 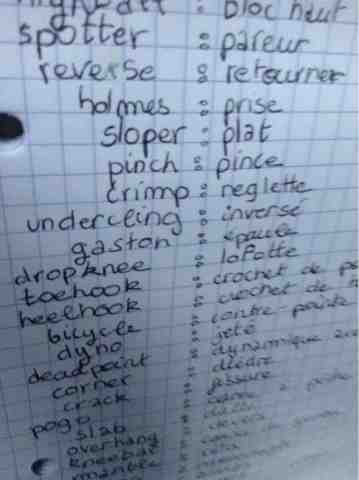 On top of that there was the nagging feeling that i was ruining my climbing career which was established on rocks, not plastic. But I am not here to prove something. i am here to learn and improve but i feel like such a rookie amidst the ‘pros’ in an aspect of a sport which still feels so new to me. I know I wanted to do this but I sure as hell didn’t want to suck this bad at it!!

With problem 5 around the corner and my thoughts way to deep into trying to understand the cause of my suffering, the buzzer went off. The advice from Sean McColl rang into my head. Look at the problem and think you CAN do it, not that you will. For the others I had looked at them and silently said WTF to myself. Not the best performance boosting thoughts. So, i looked at it and said, ok, I can do this one. That thought alone gave me some belief. I fell. But I got back up. I reevaluated my beta and boom bang I was through the bonus and at the second last hold. I was still shaking a little and surprised that I was where I was. I fumbled around mentally and physically trying to relax but feeling utterly rigid i slipped and bang, i was on the floor. I tried to get back to my high point but the static method I used for the lower big move I could not repeat. As I watched others on this move afterwards I saw girls easily jump through what I had done static. Jump? Wow. The thought of jumping did not even register into my brain. Jump. Incroyable. I have so much to learn…
Well I shouldn’t let my results or climbing abilities in competitions affect my self confidence but it is  hard to separate from it sometimes. i put so much effort into it. Live and learn I spose. It was the first comp of the season and all those voices in my head that are trying to put me down are going out with todays garbage.
And then there was the Paris comp… 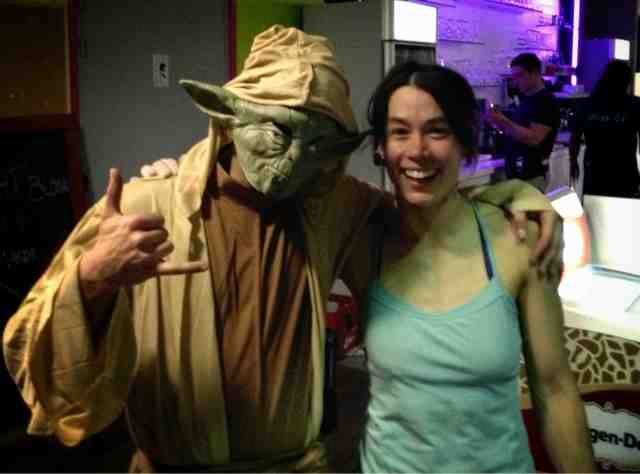 My friend Alberto had told me of a local comp in Paris which he wanted me to go to. He willing drove me there. On his own time, in his own car. How nice can people be?! I was psyched to go. New problems, a fun atmosphere, some comp style problems… it worked. I met princess Leah. I saw obi-wan kenobi. I hugged Yoda. There were a lot of strong climbers there some who I had seen around the comp circuit but the energy was lighter, less serious. I met some people and had one of the funniest comps that I have ever had. I left realizing a few things about myself and competitions. I like climbing. Simple. Competition mode can take that away from me if I let it. At this comp I found myself trying hard but I felt relaxed which obviously improved my climbing. I was focused on the climbing and not on anything else. I looked at all the problems with a wanting to try them. My motivation was so high that when the comp clock was done I ran around and tried to finish the problems that had really inspired me which I hadn’t finished. I felt slightly high and couldn’t stop smiling. It was then that I realized comps are fun. What isn’t fun is dealing with less than ideal results. I felt I climbed well. Sure there were problems I couldn’t do and some of the lines clearly shut me down because of reach as onlookers agreed but I did my best and enjoyed myself. It was then that i realized I wasn’t going to look at the results. I was there for myself and for the climbing. Nothing else mattered. And so when I left this comp I left feeling good. I didn’t have the sense of failure even though I had failed on some problems and in front of people. i didnt care who was watching me. I was there to just climb and that’s it.
The whole feeling, movement and energy involved with climbing is at its core why I climb. It is why I love circuiting in Font so much. So much movement; dancing with stone. Every move is different, every hold. Shifting weight from one foot to another can take all my focus. Stay, stay, stay i tell my foot. The black polished rock disagrees. I quickly slide back and land on my ass. I look up. Humbled again. Encore doucement it says, trust yourself, allez up. Ok. Encore enfois. I try again. And again and again and again, until there is a magic moment which transcends all inner dialogue and the body conforms with the stone, like water pouring over a mountain side. Somehow I am standing on top of a piece of rock that has taught me patience, perseverance, movement. Thank You for teaching me rock. I look forward to the next one.
Enjoy that? Say thanks with a coffee!