A 30 hour drive and a ferry ride for nine days in a land where fairies and trolls dance together between granite boulders. I was finally among the company of old friends rested between a thousand midges and the Atlantic Ocean. It was the longest I have ever driven for such a short trip but i didn’t care. It had been so long since a road trip had beckoned that I couldn’t resist its calling and things were falling into place to make that happen.

A Toyota van had  made it into our lives and once again we found ourselves on the road smelling the sweet taste of physical freedom. We were to meet a couple of old friends from the states, Andy and Walker, which meant motivated climbing friends; something that has been a real challenge to find on European soil. We were to meet in Vingsand, which was a 12 hours drive north from the ferries landing in Norway. I didn’t know anything about the place but that there would be granite roofs and 24 hour sun. We pulled into camp at 1:00 am. It looked like day and our energy level was at the same spike.

The air felt fresh and had a salty smell to it. Our greetings were the one and only, Andy Kleir, surrounded by Norwegian locals Øyvind and Thor who I had met previously in Hueco Tanks. They were awake but looked as if bed was calling so it was decided; climbing in the AM. Pulling scarfs over our eyes we snuggled to sleep with the sun shining brightly through our windows.

The first day out we went to an area which I know not the name. Actually, I didn’t know the names of many of the things we climbed on which was great in itself. As I looked around for warm ups Andy explained to me that Norwegians didn’t warm up hence the lack so we proceeded to climb an arete covered in neon green lichen. After climbing on one of the classics we headed to a roof problem which unfortunately got soaked as a rain storm quickly thundered over us.  Although the rain dampened many of the roofs for the rest of our trip, it resulted in a tour which was appreciated as we discovered that finding problems with no existing guidebook would of turned our trip into boulder scouting instead of actual climbing. Vingsand isn’t the easiest place to find problems…! 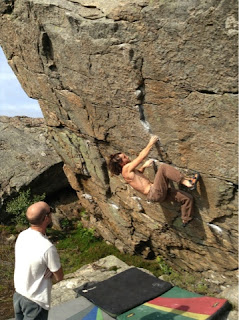 Walker eventually bused up to meet us and brought with him his endless psych. We were now a team of 3 and a kid. The following days were spent between climbing, looking for boulders and watching Andy catch fish like a pro. Our knowledge and psych of the area expired so we headed south to an area called Harbak. To our amazement we discovered not only a concentration of boulders in one spot but also people! In contrary, Vingsand was more spread out and the only climbers to be seen was our own reflection in the ponds that we passed. Upon seeing all the people, Andy’s eyes brightened up as he saw the opportunity for a broadening of conversation.

The days continued in an endless manner like the sun. Climb, sleep, eat, play, explore. Andy continued to amuse with his campfire attempts through rain showers and quotes like ‘just climb that over there – never mind the pond at the landing’ while funnily a local told him while he gave his all on a problem he wanted to do: “My friend, who is very weak, did this problem”. We laughed. Walker played hide and seek with the boulders in the wee hours of the morning and the mosquitoes continued to hound us all. My psych continued as I tried every problem that my eyes fell on. It felt good to have my zest back for rocks. 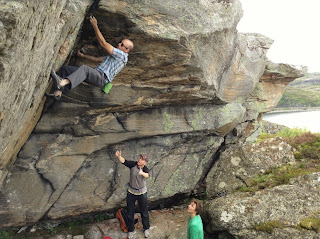 The only damper to the trip was my response from a now previous sponsor who decided to not renew my contract. Perhaps it came down to too many bad comp results; maybe they didn’t like my blog style or maybe it came down to the business side of things. I know my self promotion and media skills are definitely not up to par compared to others on the team and as for my business skills; it didn’t even cross my mind about what logo I was spraying when i put the main photo on my blog in which i am wearing thrift store clothing…! Oops. My bad.

Regardless, being ‘fired’ and rejected never feels great but I believe that as one door closes another opens. All the same, it still bugged.  I felt that i was basically a number to them and that they held no faith or value in my abilities and dedication to climbing. The last two years weren’t the easiest for me in terms of climbing, and as things were now ‘improving’ and my psych was revamped, i receive this news. 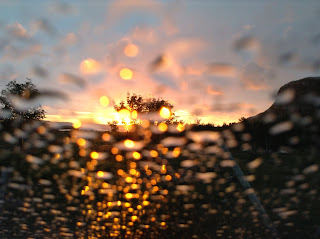 I know that bad news isn’t always ‘bad news’ just like good news isn’t always good news, but here I was, looking at the sun, setting or rising, i wasn’t sure, while digesting it. Thoughts raced about my new financial predicament. It felt a bad decision to have gotten the van I now leaned against because I depended on the small travel budget so much for its reality. So now what, I wasn’t sure. It needed sorting out and soon but as I am not a fan of worrying and I was in Norway surrounded by friends, rock and sky; it wasn’t exactly the place to start handing out resumes.  My job right now was to try and enjoy where I was and deal with it when the time arose. Although certain things sucked about this ‘job loss’,  I had been given yet another opportunity to analyzing my own self worth and a chance to revamp my wardrobe back to my own style. 🙂

Unfortunately all things must come to an end. Walker had to get back to work while Andy had to the catch the cruise ship which he pointed out excitedly every time the boat showed its face on the horizon. My only deadline was a very important date with Leonard Cohen in under a weeks time. Knowing how hard it was to find rocks and the few people we passed I opted to leave hoping to someday return with another good crew.

So, goodbye 24 hour sun. Goodbye ocean view which reminded me so much of my childhood. Red houses, fish drying on the outside, minutes turned into hours beachcombing for the perfect rock which we already stood on. Goodbye North Atlantic breeze, how I do love you. Thank you for refreshing my old withered spirit. 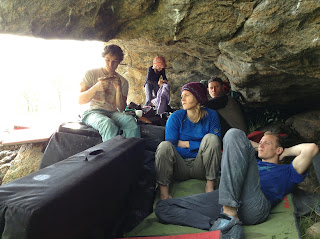 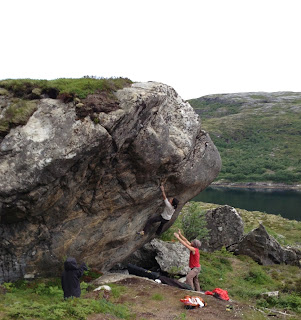 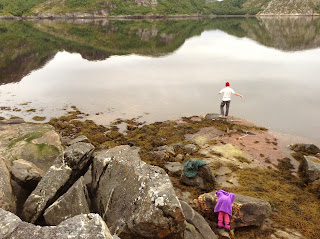 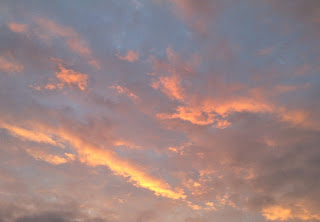 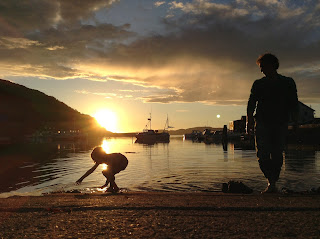 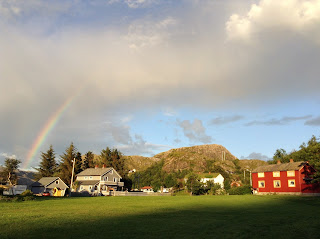 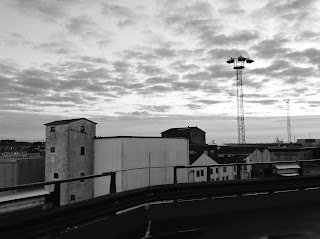