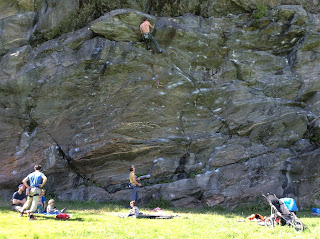 Norway revived my spirit enough that i broke the vow i made after my visit to magic woods: that I would never go to a climbing area solo again. Although staying solo in Norway didn’t entice me, Walker had said enough good things about Sweden’s rock and in an exaggerated sort of sense, it was on the way south so, why not.

Sweden was similar to Norway in that masses of coastline remained in view as did cliff bands and fallen boulders though everything was slightly downscaled. The rock we passed on the drive from Norway had a beautiful orange red tinge to it and as we ventured further south the colour changed to a solid grey granite.

Our first day of climbing we were to met up with Frederick, a friend of Walkers. As we approached the meeting spot i kept my eye out for the boulders and was surprised to find myself hanging off a rope 30 minutes later. It was a little strange to be roping up but the rock quality was so amazing it stirred from deep within me a liking for sport climbing. It was a comfortably short crag with amazing granite of Squamish quality and did everything to inspire me.

All the same, the boulderer in me was itching. I didn’t have much time in Scandinavia as I had an important date with Leonard Cohen in under a weeks time in Hamburg which no rock could keep me from. That said, a couple days on the west side of Sweden was in order. I wanted to visit the remaining Kearney family and the infamous candy stores of Gothenburg which were amazing and completely ridonkulous. 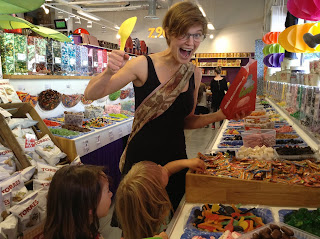 For bouldering, a few options were open to us one of which was vastervik. It would be another five hour drive but apparently there were more boulders for which I could play and rumour was that an American and German were there who I could possibly climb with. I took a chance that I would meet them and the boulders and so headed east.

The first two days were disastrous. I drove 80 km around in circles with the GPS numbers of random problems which took my fancy and spent hours bushwhacking in the dense bog ridden forest only to find myself covered in ticks, mosquito bites and my quench for bouldering completely unsatisfied. If it wasn’t for Leonard Cohen I would’ve packed up, renewed the vow i broke and left. But I had 5 days till the show and the thrift stores and beaches in the area were fairly entertaining so I decided to try one more time.

Thankfully, that evening everything that I began to question the existence of appeared: the German, the American, the infamous local Stefan and finally, the boulders. Our life was about to broaden immensely. 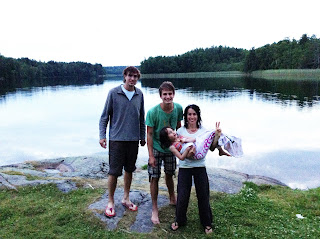 The German was named Oli and the American, Dan. They were the saving graces and highlights of my trip. They invited us to camp with them and from then on we were a team and didn’t part each others sides until the night we left. We were all psyched to try hard despite the summer heat and the hounding mosquitos. As a bonus, they had successfully found a few of the boulders so we could actually climb the next day!

Dan was on a 3 year ‘vacation’ from his night job of working in an ice cream factory where he gladly squeezed vanilla ice cream between two chocolate wafers. On one of his many travels around the world he had met Oli, the happy german, who helped buy the car which Dan would use for his European adventure. Dan had bought his food prior in large, and i mean, large, bulk quantities in the cheaper land of Germany. His hope was that it would last for his 3 months in Scandinavia but he also had to share this with the ravenous growing boy, Oli as a way to say thank you for helping him get the car. For each meal I watched Dan meticulously measure out their meals and rations while Oli tried to convince him to add one more package of this or that. The snicker bars were only for the days when one of them sent, the large bags of gummy bears which were stuffed under the drivers seat were for the end of the trip. Each day we drove in their car as mine had no extra seatbelts which the German would not ride without. Hence, each morning started with carrying the large boxes of tuna, vast quantities of spaghetti, 50 packages of dried soups and packaged uncle ben’s rice, etc etc into my van for the day. There was not a vegetable in sight. 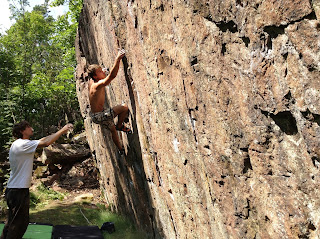 The first couple days we stuck to the areas that they had luckily managed to find days before as we all wanted to climb and not so much hunt for boulders. We played on a really nice wall which was red, long and crimpy. When the sun reached its peak the wall became more greasy and unpleasant so we drove to the Bjorne bucket which was one of the boulders I had previously hiked around looking for. Turned out that i was within metres of it but not close enough to actually see it. It was the best line I had seen in the area so far and i was psyched to try it. After having a pretty shitty comp season and being fired by my main sponsor, my confidence in my climbing took a hit. But after a long hiatus my psych to try hard again was back and when I topped this problem out I felt a great satisfaction. Never mind them comps and that sponsor, I could still climb rocks! 🙂

As our group became bigger with the addition of some swedes and a small German family we thought that finding boulders in vastervik with 3 gps’s would be easy. Turned out otherwise. We still needed to contacting Stefan multiple times a day for directions so thankfully we still managed to climb in different areas each day.

On the morning of our last day we hiked and searched for the boulders we wanted to climb. Even with directions from Stefan there was still an air of adventure to it. The rock we eventually found was in the thick of the forest, sitting under a bog and swarming in mosquitos. Nobody was psyched, not even me. There was one small problem nearby which was surrounded by half the amount of mosquitos and as we had already walked that far, we all had a go on it. On our way back to the cars we ran through the sprinklers to cool ourselves off. We revamped our psych, got more directions from Stefan and finished our day and trip with an awesome steep boulder surrounded by wild blueberries, good people and one final game of mou mou.

Thank you Dan and Oli for making my trip. Thank you Stefan for your beta. If it weren’t for Leonard Cohen, I woulda stayed. But, it’s Leonard Cohen and people die. Rocks live a lot longer. Until next time. Hopefully there is one. 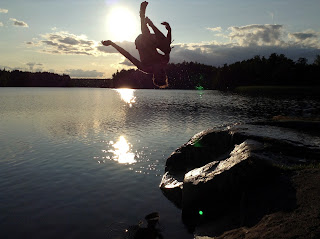