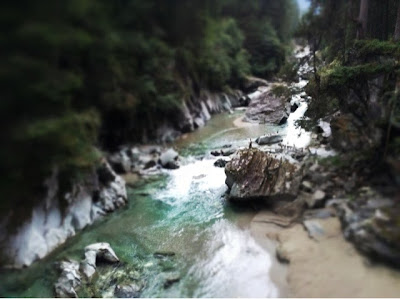 Wendy welcomed us on our first day of arrival in Magic Woods. We pulled in to find her sitting on her crash pad in all the glory of the sun. Her long hair was tied back in a bun with a pencil keeping it together. She was hard at work in the middle of a dirt parking lot surrounded by tents, live-in vans and gigantic evergreens towering on every side.

My psych was surrounded by new rocks, good friends and blue sky. The surrounding mountains were big, steep and had an unwelcoming feel to them. They said to keep to the grounds, stay low where the boulders are. So of course, we did.

We ate a quick lunch and packed up our gear. Wendy gave us a tour of what she knew and we climbed on what we could. Being somewhat limited with two pads anyone whose been to magic woods knows this is less than ideal. The talus boulders are fallen between jagged rocks on the side of a somewhat steep mountainside. The large boulders are found by following well worn trails on the moss covered ground. Rocks, fallen trees and large holes were obstacles to either avoid or use as way to move further. It reminded me of the north walls in Squamish in many ways except the holes to fall in were bigger, the rocks more featured and there were a lot more premade landings out of fallen logs to keep one from falling into one of the crevasses of death. 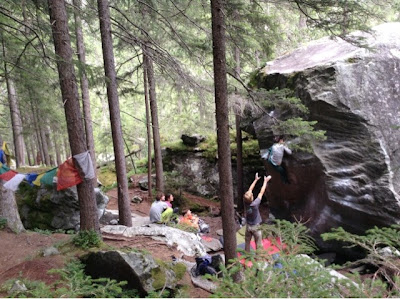 The Canadians remnants from the Munich comp were also in magic woods and it turned out everyone in camp that I knew were resting the next day. With some matter of dislike and at the same, acceptance, I took an undeserved rest day so to keep on schedule with everyone, aka the  partnering psych and much needed spotters and pads.

There was basically one week left with the Canadians and Wendy so days were maximized climbing two days on and one off. My legs ached with fatigue more than my fingers because of the uphill hiking which i was more then unaccustomed to. Getting used to the sketchy landings took me a few days as did my lungs for the hiking. The many moderates in the area proved a very nice warm up to the area. At that point everything was tried  from v0 to v-impossible and all of it was good.

The week passed quickly. Too quickly. It seemed as soon as we got there we were waving good bye to everyone who greeted us: the Brits, the Canucks and unfortunately the sun. I wasn’t sure when it would return but the forecast seemed positive and so we stayed positive and hoped for the best. After everyones departure Magic woods became a different place… And a different story. Until next time…