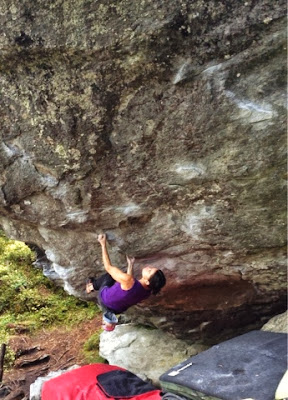 It’s strange to write about a problem that I haven’t yet sent. Perhaps even crazier the number of days spent on it, not only in a row, but thinking and pondering about while the rains fall and dampen its holds. But this story isn’t so much about the problem; it’s about an idea turned obsession. Perhaps a story from which one could draw advice from on how to NOT send ones project.

Upon arriving in magic wood and not knowing the place, I didn’t have a tick list that excited the bejonkins off me so basically it was limited to the one problem I’d seen in a photograph: pura vida. Having been in Magic Woods for close to 4 weeks my energy was spent on everything but that. Tried twice with two different groups of friends, I was unable to do the first move and the end just led me down a path of confusion, so my effort was brief.

After finishing many of the problems that enticed, Pura Vida crossed my mind again. A fellow camper, Axel, had thoughts of it as well, like it had become an alien that slowly invaded people’s minds. With renewed psych off we went. Working backwards this time, the end was surprisingly figured out so I returned to the first move. Every time, I was thrown onto my back into its pit of a landing as my hands refused to grasp the hold in a way that actually held on.

The next dry day I realized the unhealthy part of obsessing over a project through five days of rain. Physically I was fine but mentally I was done. I felt burnt out on it not from trying but from the thinking and obsessing about it while listening to the rain drops fall on my van. Thoughts of escaping invaded my mind as was the mistake of waiting for it to dry. Returning another day with Alex the psyched german, I repeated everything but the obvious. Spit off again and again, different feet and handholds were tried with foolhardiness. With a perplexed face, I watched Alex do the first move with ease. And here comes something that I love about climbing. He pointed to the subtle difference between the position of our starting feet. ” You are starting with your left foot under you and I place mine here.” He pointed to the big rock which ones ass will land on if one doesn’t stick the big move on one summer. I did as he suggested and bang. What had moments before felt impossible was done with ease. I repeated it five more times just to prove it to myself but fell at the next crux, two holds from the finish. The impossible suddenly felt possible. But as fatigue set in, the holds started to feel smaller and greasier. The first move became hard again.

Then the sweet bitter rain came. Like a visitor that constantly dances their fingers on ones kitchen table over a cup of tea. That day the obsessing started. Sitting in the rain was something i had enough of this trip. I thought about leaving. But no, I can’t, I’m so close. It will dry eventually. I will wait. Pondering the moves, I visualized myself doing it over and over again. Putter patter. Left hand there. Drip drop. Right foot there. While people climbed on the Bruno boulder I walked to it like visiting an old friend to see how it was. Condensation was high, sucking water onto even the lower holds which were once lined with the fine colour of white.

The first day back offered damp holds matching my low psych. Yet falling near the end instilled hope. There was a few more days of sun coming and the optimist in me said it can only get drier. But the next day offered much regression. Everything on it felt hard. Again Alex came to my rescue.  “You try it too many times and too many days in a row. You look tired.” That was a mistake often repeated but coming from someone else’s mouth was like a reinforcer to the truth. With that we left. We tried other problems and the fun returned.

Returning the next day with a fresh head, hope was provided. My first attempt felt strong but still, I fell at the end. After a few repeats of that frustration and fatigue started to take over while my tips screamed bloody murder at me. What are you doing to us they screamed? Every bit of me felt done. 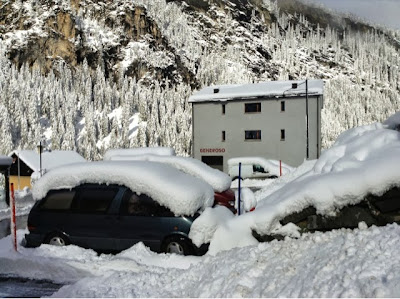 The rain was pending. But this time it fell in light drops which kept most things dry. The condensation wasn’t so high and the friction felt better. On my rest day I thought of things outside of that boulder. But ironically, each climbing day I still returned. I start counting my tries to avoid being there too long. Giving myself 3 tries from sticking the first move and 3 falls of falling on the first move took away one full attempt as if i had stuck it. My spotter thought I was nuts. I thought the breaking point happened days ago.

There was a panic inside of me that told me to go there every day. It could rain tomorrow. People spoke of snow. There wasn’t a voice saying breath, slowdown. If it was dry, I’d go there, until the one day when I didn’t. My last day on it I repeatedly fell off one move from the end, locking my left arm down and hovering my wavering hand within mm’s below that last crux hold.  A small back muscle from doing the long lock off felt strained and screamed silently to me.

The next day I debated returning or breaking my obsession. When asked how long I’d been on it, the response of the last eight climbing days triggered shouts of don’t go; climb with us. Perhaps they were right. Rest from it would be good, mentally and physically. Logic trumped passion. I tried other problems but the sense of unrest remained. I felt like I abandoned my best friend. God dang I thought. Just one more try. Just let me have One. More.Try… 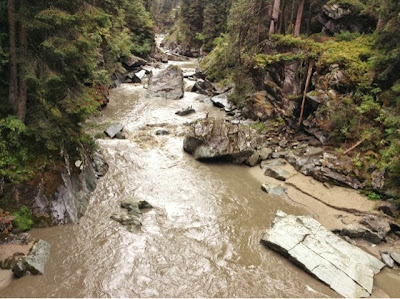 And then it came. The dreaded snow. 40 cm of it. Earlier in the day Petra encouraged me to descend so to avoid getting stuck in the mountains. The optimist in me didn’t believe her. The four of us remaining campers huddled under Knuts van door and agreed it wouldn’t snow. It was too warm. We escaped to town for a couple hours only to return to snow covered roads. My van sat huddled by the guest house. We slept there to avoid the slippery slope to camp. The snow insulated my van and kept out the street lights. The remaining climbers paced the room in unease while others escaped for snowball fights. I kicked myself for not going back. Was this punishment for obsessing and being irrational with my attempts? Only if I made it so. But really, it’s just snow. Besides, the little tweak in my back will thank me.The next day, over a foot of fresh snow covered our world. The optimist in me delivered images of melting snow. It can’t be over yet. Having already waited through many wet days what’s a couple more? Or a few more. Or another week. Hell, when it dries, maybe I will even go to other problems, find another project. Or maybe I will leave and see another part of the world. But this line is worth the wait.

The problem now holds memories and stories of times past. It offered me something that felt impossible to possible; it gifted upon me patience and impatience; determination and stubbornness; mental battles within myself through various weathers and a taste of obsession and physical fatigue. Currently the snow is melting and my psych remains. Tichino beckons but only until this baby is dry. The forecast looks good and as Arnold says, “I will be back”.

Thanks for reading.
May the force be with you.✌