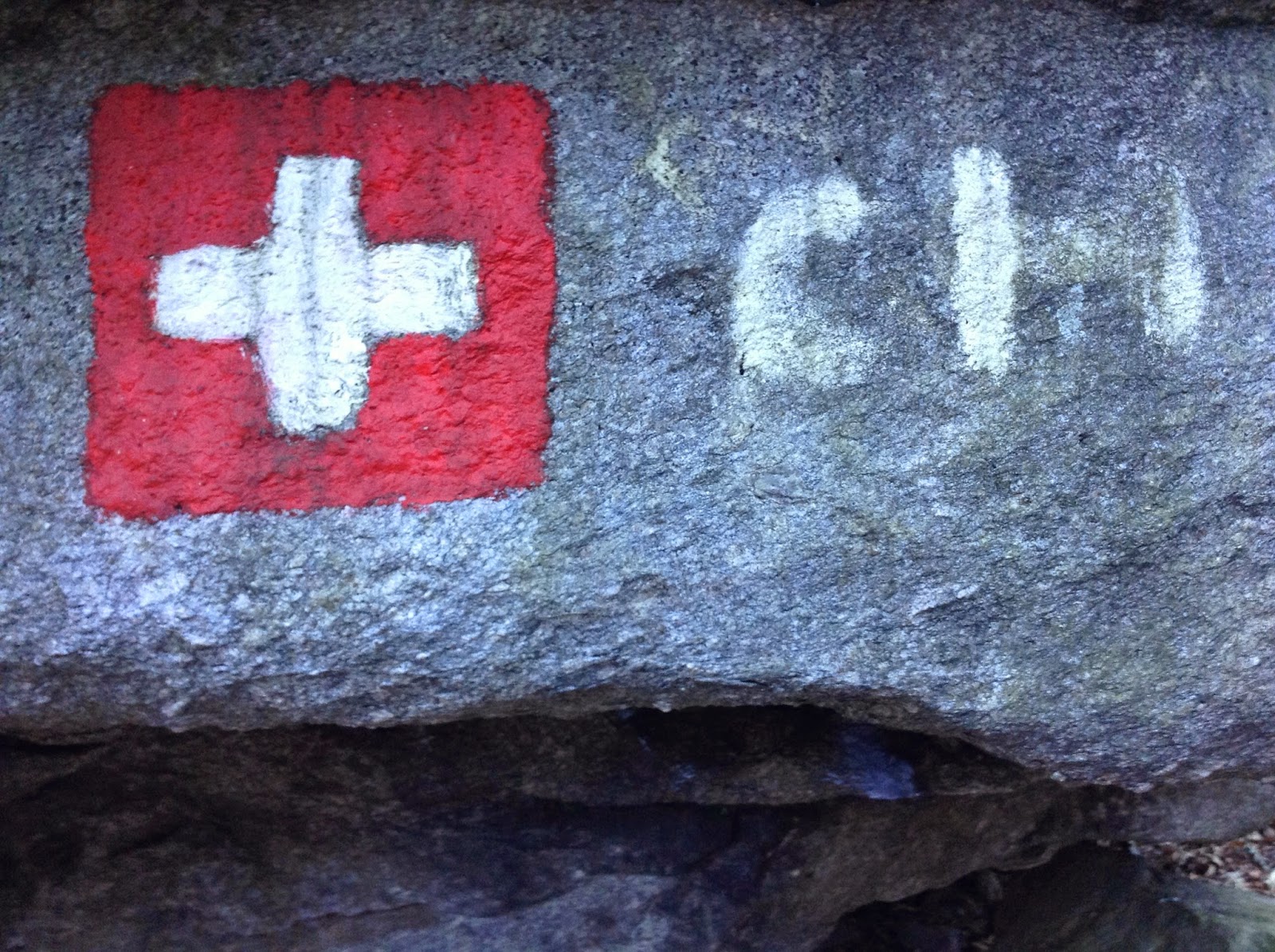 It’s been a while since my last post. There’s been waxing and waning between ideas of what to write to the contradicting thoughts and emotions of why bother, wondering what’s the purpose of blogging anyway. Pre-Christmas season was a right off. Energy was low and the old game of tug of war came back. The questioning of if I was standing in the right spot echoed from my insides while ‘stay or go’ became the internal question of the day. To be with family and friends at Christmas pulled at me like they would never release. I thought about the last Christmas; the pre-Gite Arbonne days, being in the van in Font with so much rain beating down. The time leading up to it wasn’t easy and ironically the moment I decided to quit everything, things turned around as if an unanswered pray was heard. This realization brought a sigh of relief like a loud bell, oh yeah, this Christmas thing.

Although without the big pleasant crowd, I had many blessings to count. Walking the city streets of Munich and seeing the begging homeless made me grateful for van life, however cold. The thought of actually packing up and getting on a plane made me slither a little on the insides anyway. Although the idea of long days spent driving under a huge sky between the many bountiful crags pulled at me; staying in Europe was what I wanted, at least for a little longer. 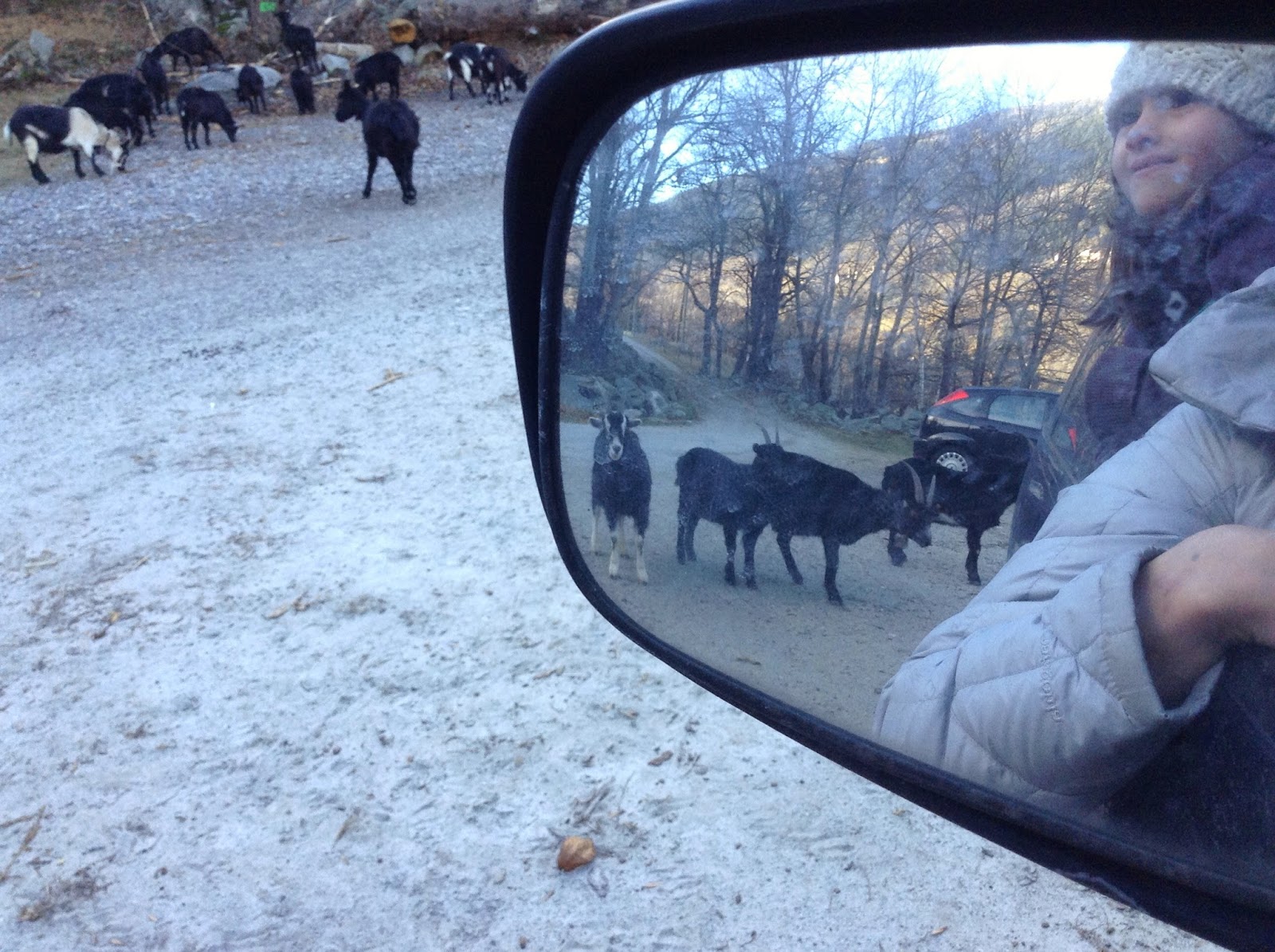 In November and December the roads between Germany and Switzerland were our home. Magic Wood was covered in a pile of stinking snow which apparently would take months to melt. Ticino was ripe with a crisp blue sky. The whole area was virgin to me. I had visited briefly ten years ago but the memories were vague. Upon arriving the view started to look familiar. The winding road, the big church with the Virgin Mary looming steadily above the village, the old rock buildings scattered above which I wondered were livable or not.

Our stays were short; a weekend here, an extended weekend there. Balance was sought between the plastic world and the outside. A local friend Petra showed us a couple areas while the tour continued with Toby the friendly giant who we had met in Magic wood. The area became more familiar as did the smell of billy goat and techniques on how to roast chestnuts. I’d have to say though; Ticino didn’t stir my soul like some places. It never bothered me to leave and yet, it never bothered me to stay. The one exception was when going to meet my old friend Justin Wood from the States. I had just over a week to frolic in the forest with this kindred spirit and I dreamt about all the cool problems we would try and stories we would tell. 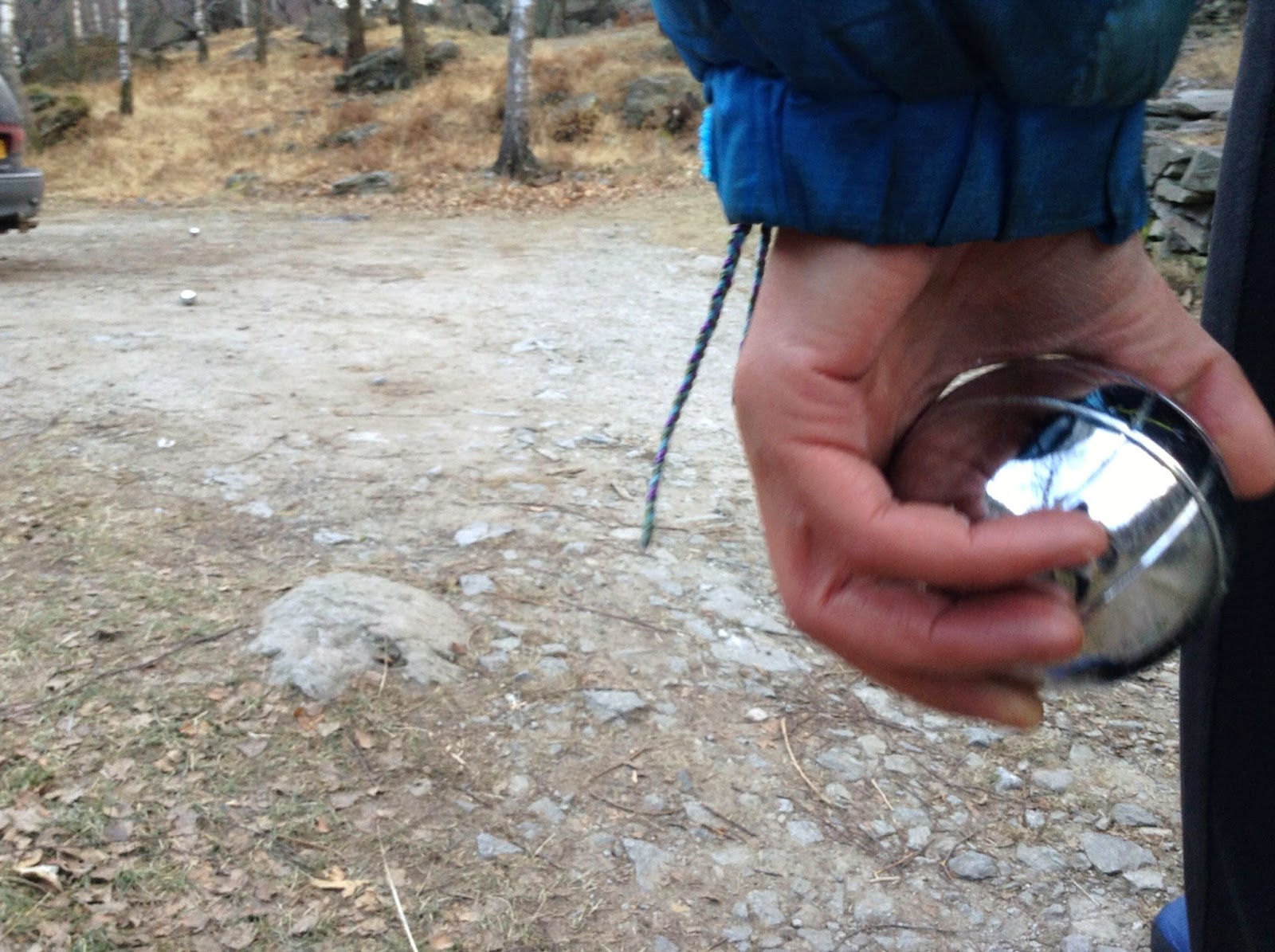 On the way there from Munich I decided to drive via Zurich to attend a bouldering comp at the new Momentum Bouldering Gym and to face the realization that I live in a time warp. Having bouldered the day prior, I anticipated the full day of recovery and rest I had ahead of me. After much diddle dawdling, the organizer emailed informing that the comp was actually today and started in 20 minutes. My ass was still 1.5 hours away! Undeterred, we battled the horrendous traffic and confusing streets of Zurich and we showed up 3 hours later. The comp was worth the hassle; the different styled problems and unpainted walls made for a challenge. The gym was not insulated thus allowing me to blow O’s with my mouth proving what some would consider ‘good conditions’. Despite my lack of rest and untimeliness I made it into finals, having the privilege to stand in the same line as the Swiss power house Petra Klinger, who is an inspiration to watch. At the end of the comp I walked away not only psyched but with a gentle reminder to work on my weaknesses; dynos and big moves involving especially shitty feet around incredibly awkward corners.

The following day we headed to Ticino. Unfortunately Cedar caught a stomach critter which lasted a few days and a couple days later it was my turn. As I felt the sense of fainting coming on, I quickly pulled the van over only find myself moments later having rolled back into the road with people honking at me and Cedar shaking me while simultaneously holding a bucket under my mouth. The feelings invoked of helplessness and vulnerability by both of us could be a story unto itself. Needless to say, our ten day visit to Ticino was quickly diminished as we huddled away from climbing and human contact as the sun teased us under the cold conditions. 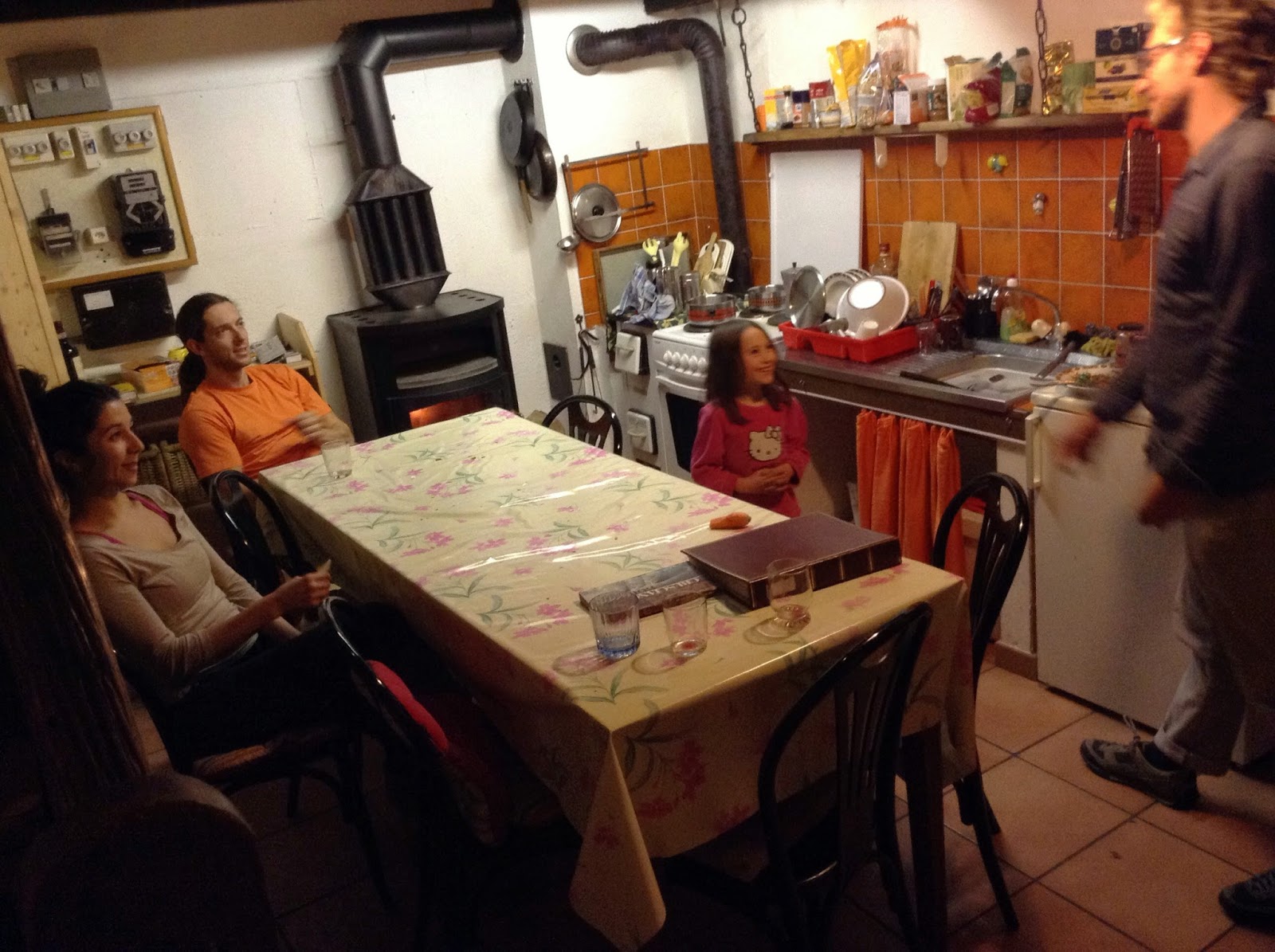 And so that happened a while ago… Like last year to be exact. I could blame busyness for my untimely post of these adventures or the absence of a computer that actually worked but if truth be told it was motivation. Sometimes it really seems like there is nothing to say but perhaps the real crux is getting started because it seems now, when the first word is done, there’s no stopping.The last day consisted of an international posse counting 2 Germans, 2 Canucks, 1 Australian, 1 Spaniard, 2 Bulgarians, and 3 Americans who all headed to area 101. The problems in this zone were big; some beautiful, some not, but all of them were given a fair go. Alex and I played seek and destroy for a new level for us. I was close on the start moves, she looked better on the end. If team ascents were permitted we’d have that but if divided by 2 the answer is not new for either of us so we just continued our punting on the other rock formations on our path. When the sun went down, the headlights came out. When all skin and energy was spent we headed back to Justin’s for what would be the last Justin supper.Our time with Justin amounted to two or three days but it was better than nothing. Catch up time on the latest of my Salt Lake City friends, Hannah, Sunny, Carrie, was brief but enough to make their presence felt closer. In the meantime I got one problem under my belt, a line called ‘teamwork’ which should be renamed ‘dagger holds’. But as I owe the send to the random boys who walked by with perfect timing to spot me sketching on the top, the present name is rather suiting.

Thanks for reading. X