The usual method of travel for me; last minute, slightly unplanned and completely unorganized. The whole trip was an idea conceived in almost a dream like trance. The possibility of it actually becoming a reality seemed as unlikely as winning the national state lottery. The sentiment I held was to listen to the tingling feeling that grew inside of me the closer the date came. No matter how many pro/con lists I made, I knew there would be serious regret if the chance before me was not taken. Work and rocks can wait, but this wouldn’t. There is only one Toronto World cup in 2014. Just one.

So how to do it… The idea of crowd funding was proposed to me on numerous occasion but I wasn’t sure I had the balls to actually go ahead with it. The thoughts of unworthiness plagued me yet realistically, it was the only option. I tried to view it as an application for public sponsorship. Magically once the decision was made, things came together to make it happen. A good friend vouched for our tickets with an unwavering faith and I followed through with the plans from my side. In less than 72 hours, Cedar and I were packing and running towards a plane bound for Toronto, Canada. All I knew was that we had a place to stay for the night and the Toronto World Cup was in 4 days. We would return to Munich after a brief stopover in Squamish. Everything else and beyond was a blur.

Upon arriving, the heat and humidity of Toronto filled our lungs. With a friend, we walked the streets and took in the scenes of small stores that sold random obscurities from all corners of the world. We climbed at Canada’s oldest climbing gym, Joe Rockhead’s curtesy of head setter Ayo. (Thanks Ayo!) As the days passed I tried organizing our accommodation for the competition but found myself financially unable to buy food for the day let alone book a hotel. While I tried to convince myself to trust the situation, the stress crept into my bones as I stared at the last of the plane snacks stuffed in an old bag. Wondering what to do, the realization came that I would have been stranded either way be it in Munich or Toronto. I considered myself lucky to have a good friend who provided us with a roof and kept our hunger at bay.

The evening before leaving for the comp, things sorted themselves out. I breathed out a sigh of relief once a hotel was booked. As we dragged our luggage on and off the various trains and buses, it didn’t take me long to appreciate the public transportation systems in Europe. With no signage or staff around to direct lost travelers, the travel hit with more adversity than anticipated. As event after event unveiled themselves, I took it as a chance to practice the ideal dreamy headspace I had envisioned for myself when facing adversity in a competition. Unfortunately my alter ego would have none of that. As my head battled between war and peace, we eventually disembarked the crowded bus in Hamilton. Arriving too late for the technical meeting, I headed back to the hotel, unpacked, and searched for my Canadian friends. 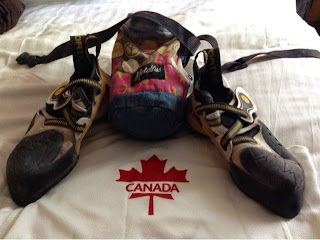 The start of problem two came easy as it was a nice roof section but then I was faced with a big move which made my insides scream with fear. In retrospect, it wasn’t so big; I just didn’t do it. My friend Tiffany Hensley gave me the outsider’s perspective. She noticed how I didn’t have my chest open or my arms straight when I went for it but rather my shoulders and chest were curled in as if in a protective position. Not ideal for expanding for those big moves…yes, I see now. She gave me the yogic bear posture which I was to practice while standing at the base of problems to help me open up and give invoke feelings of domination. (Needless to say, I did try it and yes I felt awkward as hell but the difference was certainly felt. Thanks Tiff!)The next morning the sun shined brightly through the crack in the curtain. As I prepared my bag for the day events to come, I tried to embrace my tingling nerves which were acting up more than usual. This would be my first World Cup on Canadian soil. Maybe it was some home pressure felt as many people knew me from my outside achievements or perhaps it was the fear of being compared to the others and feelings of inferiority… either way, I had to figure out how to deal. Watching the focus and intensity of a nearby competitor, I mimicked her actions thinking they would help me to shake off my anticipation.

Climbing the stairs to approach problem one, I turned around to face an awkward sideways jump. Grabbing the hold seemed very much out of reach yet the more I tried, the more focused I became. My efforts improved but the buzzer echoed, stating that my turn was over. Walking down the stairs I tried to ignore the negative chatter that criticized me because I didn’t do the first problem which is usually the easiest. I opted to practice my new mantra “get the hold” and reminded myself there were four more problems in line.

Still no bonuses I kept my hope on the last three problems continuing this down to the very last effort on the very last problem. The next in line suited me but I felt weak on the bonus crimp and didn’t trust myself to get to the next hold with the beta I had envisioned so alternatively, I threw and missed. The slaughtering continued as I threw myself at the huge sideways double dyno completing one goal which was to fall on my butt from trying so hard. The final problem gave me the bonus but nothing else. Failing to see the slopey lip high above as an option, I instead fought to match a small crimp followed by a long move with little success.

Walking away thoughts imploded in my head that I was doomed. The realization came that perhaps the strength, technique and mental toughness just wasn’t there. Or maybe, just maybe, I was tired from the stress of the day before and physically more tired than usual. But the feeling that I wasn’t cut out for comps lingered deeply. This took a couple days to pass and after a fun session at Niagara Glen and a fresh perspective, I knew I didn’t make a mistake in coming. The value of a trip or competition shouldn’t come down to results. I realized the importance of planning ahead which would help leave more energy to prepare for the job at hand. Either way, I decided to improve my organization skills for competition and for life in general. Realizing this plan takes organization and being a top notch procrastinator, this, may take a miracle. But as I have a sense of hope which can wax and wane between despair and idealism; as a believer in miracles however simple or crazy; I think this can be done. The evidence shows. I got to take part in the Toronto World Cup with less than a penny in my pocket because a few people believed in me. Their confidence was contagious enough to drain all doubts of how I would get there. Now the crux is instilling this confidence into my own climbing. Until then, it’s a work in progress. For now, I get to spend some days under the Squamish chief…