My mind steps in offering words of facts and mediocrity which in no way convey what I want to say. The only thing I care to write about is the very thing which helped, yet it is that very thing which seems to have no words. It conveys an overall sense of complete emptiness yet completely void of any loneliness. Coupled with contentment and ease, it gave a glimpse of what was possible, offering a taste of what could be.

It may seem like confusing talk, though to me it is quite clear though not concrete. The only way I would allow myself to go to the Toronto and Vail World Cup was if my goal was simply to have fun and be relaxed. In other words, allow myself a taste of freedom. Climbing has always offered me that liberty; a chance to let go of the voices that tell me I can’t do something or that I am not good enough. It demands incredible focus and concentration on the task at hand. One’s very existence becomes void, fusing with the rock itself into a fluid of movement. All thoughts and feelings disappear with the simple task of focused action on the climb itself.

But what if there were a thousand eyes watching your every move, the music a little too loud, conditions not ideal? Now put in a timer, a judge and a climb set to test your weaknesses and strengths. You’re comfort zone has just been stripped away. The sense of flow that climbing offered is interrupted. Awareness redirects from inside to outside. Eyes widen and breathing becomes shallower. The panic button is near but you’ve finally trained yourself to expect this stress and adversity. Suddenly things are changing. A different, unfamiliar path shows itself in increments. The breath becomes calm, the focus rebalances inward. With a simple deep breathe the nerves feel a calming sensation. Thoughts are easily let go and feelings acknowledged and released. The goal is accomplished. Fun is had and accepting things, even the shoulda’s and coulda’s, is easy. 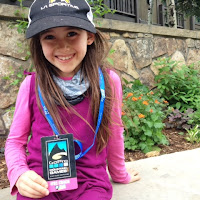 That was the Toronto World Cup for me. My focus remained on my goal, to relax and have fun, no matter the outcome. When tension arose I reminded myself of my breath and let it go. There was to be no repeat of mistakes made at Nationals; no deer in headlights. Although occasionally, I fell down the path of negative self-talk, losing focus and confidence the higher I got up the wall, there was an overall feeling of having figured something out. It was a nice solace from my accustomed uncomfortableness at comps. To have finally found a way to breath amid the stress; to enjoy the experience like I wanted proved a great release. Given my shoulder injury and the resulting lack of training, surprisingly, my result was better than usual. Departing Toronto, feelings of possibility and hope infused themselves. I knew with more work, the potential to relax and re-focusing could go even further. 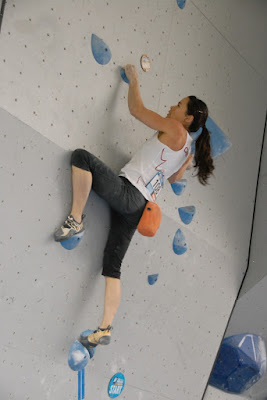 My insides exploded with the apparent simplicity of this revelation which presented a new challenge: maintaining that state. Leading up to Vail, the pressure built up to relax and have fun. Ironically the only cure to this was to simply keep doing what I had done for Toronto. The realization of how easy it was had me in a stir. It no longer felt easy. What I did before took no effort, just awareness. Yet here I was trying to let go of the idea of letting go while trying too hard to let go… it was the most opposite of battles.

With my wanting the emptiness and freedom which seemed so eternal quickly disappeared into a hiding place which only I could find. My will wanted its release, to welcome the sense of lightness but that very clinging led to its own demise. There was no separation but my mind thought otherwise. My freedom had hidden beyond the veil of clouds of my own mind. Feelings rose out of fear, challenging its existence and disappearance under whose presence it could not show itself. In its own silent nature of stillness, it patiently waited for my return. There seemed no going back but the very idea of going back to what already existed was insane. The answer had showed itself. It was allowing the answer which was the challenge.

It wasn’t surprising that Vail didn’t go so well. Thinking back to Toronto there were clear moments when I anchored myself with my breath. As for Vail I recall one sole moment when I stayed focused and clear: problem one. I was stepping precariously onto the starting hold, repeating the word ‘trust’ over and over until I finally leaped to the final hold. After this, reminding myself to let go, stay focused and breathe was incredibly hard, as if there was a limited amount of built in presence. Walking away, I learned more about what does work and what doesn’t. The subsequent challenge of letting the thoughts and feelings go regarding disappointment and failure were curiously enough, coped with much easier than past experiences. 🙂

Between the two comps, learning what worked and didn’t work filled me with a motivation to do it all again. To completely lose myself and be completely engrossed in the task at hand proved the ultimate goal. Luckily I have been given another chance and am allowed to compete at the Munich World Cup. 🙂 Until then, the daily adversities of life are opportunities to practice what I must do in comps; simply let the bad habits and thoughts go, focus on my breath and fill myself with positive belief of what’s possible. Sounds easy right? 😉

If you’ve enjoyed this post feel free to make a donation to help fuel this journey!!!