I don't kiss and tell. Nor do I tell the the name of this one being which I will speak of. Mainly out of privacy. Or more so, perhaps I fear superstition. That if I speak to loudly and reveal that before actually sending, a curse may fall upon me (if it hasn't already), and that i will never send or conquer that which already has bound it's spell upon my being.

Simply, it's like this: an obsession. Why? Unexplainable. It just is. When I first heard it's name, I wanted to climb this problem. Later, the same reaction transpired when I  saw a photo of it. When it came to meeting it in person, with all the logs and rocks scattered in multiple levels at is base, the steepness of the rock, the size of the starting holds, the confusion of the end sequence, that wanting became even more. It became a need. 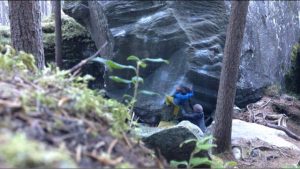 It began three whooping years ago. That means this problem accounts for my longest project ever. In terms of time and effort, it takes the cake. It has involved more energy and will than any other. It occupies my mind whether I am near or thousands of miles from it. I make my plans around it, change plans for it, sacrifice for it, fly across the world for it.

Yet, it remains a project. Securing the pocket multiple time doesn't mean sent. Nor does falling at the end over fifty times or sticking that first hard move even more. Nope. Not close enough. Most folks opt for the easier but long and awkward move of its alternative start over the burly small crimps found on my version. The starting foot is a mere smear, with a tiny pebble which outcrops just slightly. It took a bit to understand the first move. That little smear and the angle one places ones foot on it, with just the right amount of pressure, can mean sticking or falling flat on ones back. What feels impossible in failed attempts is surprisingly easy when latched.

There's exactly 20 moves with my beta. The first move is the hardest in itself while the ones in the middle are easier but not to be confused with easy, they still take effort and focus. Then of course there is the end moves which look deceivingly easy yet are really quite technically hard. That heel has to be placed 'just so' otherwise it's over. The body has to be pulled inward to the rock 'just so' otherwise it effects the heel which effects the whole thing. And if you arrive there from the beginning, you need to relax enough and yet maintain enough tension just to let your body succeed in doing just that. Some people would call this 'tedious...' 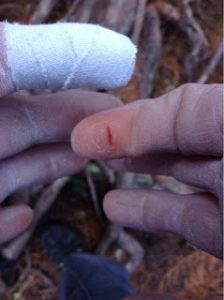 I don't know what my problem is. I have done the end many a time. Yet when arriving there from the beginning, my mind begins to cloud. Things get fuzzy as if in a dream which I can easily wake from usually to land on my ass. My focus changes from what I am doing with each hand and foot placement to the voices and sounds around me. The tension I must keep in the heel is like an idea long forgotten. If my hand secures the two finger pocket, it's panic mode. The conversation commences. "I am doing it, I am doing it." A reply of "shut up and focus!" The critic comes forth whispering, "you're not good enough to do this!!" "The heel is going to slip!!". My body automatically changes the heel to a toe. And then, as if scared, or some invisible power pulls me down, something gives. I am one the ground. Again.
It's tiring now. Projecting is hard. It can be mentally and physically exhausting. But the closer I come, the more hope it instills. It's like a tease. By the time you read this, the yesterday I speak of will be long past. I went to my project rested, psyched and determined. My last session resulted in a new split. It was now the fifth experienced from this thing in the last month. But after some rest, I convinced myself I was ready. But on my very first try, the split re-opened. The moves felt harder than usual. The first move was now unrepeatable. After having rested four days from this thing, knowing my trip was very near its end and with fresh blood oozing out of my tip, I lay on my pad and simply expressed what was in me, I cried.

What had felt completely and convincingly possible now took a 180.  It felt like I was back at square one. With one climbing day left, there wasn't time to let the tip heal. I thought about all the other rocks and areas I sacrificed so to stay around and send this thing. I called myself crazy for being so attached. But, I honestly thought it would go sooner. Unfortunately, with the split tips and weather, things didn't work out.

My thoughts flew back to three years ago. Again. I was falling at the end but got shut down by 30 cm of snow. Season ended for everyone. Last year, our stays were shorter and less frequent but on that rare moment when I stuck the first move, again, I'd fall making the long reach to the pocket. This year I changed my end sequence by adding a move to make the long move closer. Reaching the pocket was much easier, the end came more consistently. The first move had to be re-learnt but after some work, this eventually came, after all, its memory was still encoded in my body. The problem is the mind. It remembers how tedious the end is. How one could send if everything isn't 'just so'?

And now, it's close to over. So close, yet, not. I am flying away from this beast, this beauty. I don't know if I will do it tomorrow. But if its spell is not broken, I will be back. If not tomorrow, next year. If not next year, well, that someday will come. As much as it has beaten me down, I have to get up. And like any affair, my heart can be left broken, yet I know, it has been worth every second.

If you have enjoyed this post, feel free to donate to help motivate this blog!