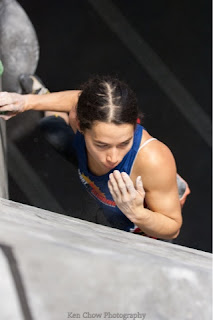 Do you remember a time when you wanted something so bad, all your energy and thoughts combined, spiraling towards that one and only, which finally in the end, was swept from beneath your feet? You go through a few days of disappointment and upset yet, somewhere in the deepest of spots, a small feeling knows that what you wanted isn’t necessarily what you needed. Anyway, that’s been my last couple months…! Nationals… slight disaster…!! Not just the event, but more the time leading up to it. My shoulder was a mess; pain was my constant. After BC provincials, it was to the point where it demanded no more. My physio suggested I pull out of Nationals. Everything hurt to moving my clutch to no longer being able to do a simple pull-up. My cyclic schedule of resting a few days followed by hard climbing wasn’t working; completely rest was mandatory. The fact that the Nationals was in one month had no say. Climbing through pain doesn’t work with progress or longevity. To those who push through pain may understand my ways; long term simply wasn’t in my program. I just wanted to last long enough to Nationals. The idea of longevity had to become part of my vocab. So for the four weeks leading up to Nationals, my time was spent counting reps of physio and stability exercises instead of climbing; less than ideal but better than further damaging my shoulder. 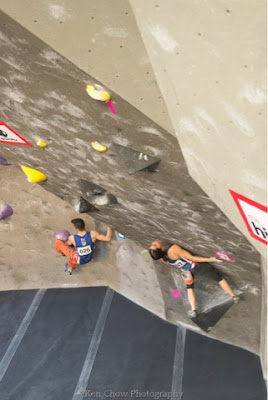 A week before the comp, the pain and inflammation were decreasing. Not wanting to compete after three weeks of complete rest, I headed to the gym for a test session to see how everything felt. Pain was still present and my body was uncoordinated and lacked power; basically, it was horrible! With disappointment and frustration, I abandoned the idea of competing. After wrestling with the idea of using the medical exemption rule, I asked my physio for the letter. They used previous results when considering the person for national team. My results from last year averaged me as third out of the top six Canadians. While this seemed good enough to allow a chance, my results from last year’s Nationals lingered and my thoughts fell on the selection process two years back when the committee favored two younger competitors despite my results and ranking being higher. Now, I was torn..!! Attending Nationals injured and after weeks of rest; or take a leap of faith that my results from last year were good enough, and use the medical exemption rule… The cynic inside of me decided to test the waters of climbing again. Ironically, everything felt miles different than the day prior. My body felt light and strong and my coordination was working. While it wasn’t rational to decide ones readiness after the second session, Nationals were in three days, only 45 minutes away and deeply, I wanted to go. It was then decided. Mistake or not, I was going. For qualifiers, I pulled through to semis though my flow wasn’t omnipresent. For semis, it was another story. Climbing felt foreign and my whole being was confused; as if all my skills had run away. I lacked power and conviction. Finishing with no bonuses and my worst result at a Canadian comp ever was disheartening. Gone were my chances of making team and doing one more year of World Cups. I kicked myself for being irrational and obsessed; for seeing my ranking as third out of six not good enough; for not trusting the selection process despite them telling me their switch to 100% results based… I sat in a gloom of regret, frustration and annoyance. As time would tell, although it was painful to deal with this defeat, a part of me felt relief. Physically, my body needed a time out to heal. Mentally, my mind needed a break. Had I placed well, training would have continued and I’d be more broken. The end result wasn’t ideal but it was giving me the opportunity to heal which otherwise, I wouldn’t have taken. It was a giant slap in the face that we ultimately have no control. We can take the steps towards what we want, but life itself will steer us towards what’s best; whether we think so or not… 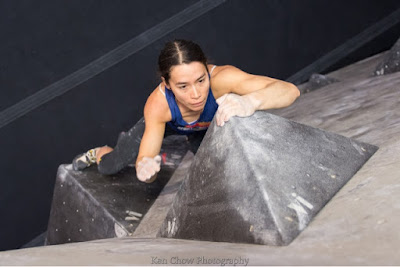 So finally, after months of chronic shoulder pain, my body is getting the rest it needs. It’s been a month and a half already. Regularly physio and stability is keeping me on track. In the end, the opportunity to do World Cups is still there, (given the 17 names above mine don’t fill up the limited 6 spots!!) but either way, thanks to this wakeup call, competing isn’t my priority, healing and longevity is. As Katie Bird said, ‘we’re lifers thomo, we gotta take care of this one self’.   Thanks for reading. and a big shout out to Ken Chow for the many photos!  If you enjoy this blog please consider donating to help make it sustainable. 🙂