She stood on the green grass about to approach a forest which loomed with spiders, ticks and little critters that had teeth sharper than her kitchen knife. Looking deeper, the light appeared to disappear into the shadows of a thick green foliage. On her back she carried a crash pad; a piece of equipment used for the type of climbing she preferred, bouldering. It used to be part of her everyday attire but it had lain dormant on the shelf of her workplace; thrown on top of the highest shelf in a large room housed with hundreds of odd multicolored plastic holds of various sizes and shapes. It was the weekend and she had a couple days off from her new job in the big city. People that went on climbing trips for weekends were deemed 'weekend warriors'. She never thought that description would fall under her name. With old friends visiting from overseas, she found herself in a situation where she felt somewhat uncomfortable and queasy. Thoughts of ticks falling from the tree branches above her and slowly, yet unknowingly, embedding themselves into an unseen part of her skin filled her imagination. Oblivious of what others thought, she voiced her concern out loud. Looks of curiosity and question fell upon her.

A reply quickly said that a tick landed and bit a girl in the forest last weekend. She had nearly suffered the end of her existence having been inflicted with a bout of Lyme disease. A twinge of fear and disgust ran through her veins and a gullible reply of 'really' squeaked out, though her rational side knew this wasn't true. Laughter was heard ahead of her as she stood frozen on the green path unsure of whether to follow her friends or run back safely to the locked car. She looked up and through the green leaves and she saw the color blue shining through. It hit her with realization of what had happened. She had been away too long. The city girl inside of her which she didn't realize existed came out with surprising extremes. With this realization a sigh of relief calmed her shaken nerves. With right foot in front, she quickly yet cautiously caught up with her friends. The remainder of the day was spent joyfully climbing the features and holds of various limestone boulders scattered in the small section of the Frankenjura where they lay. The rock here was none like she had climbed before. Very specific and although not the most stunning of lines, the climbing itself was interesting and hard. She had bouldered in the vast area on a few occasions and each time her fingers, that she normally considered strong, were proven otherwise. The rock was hard and slick and offered no friction to make up for weakness. Between tries on the many lines offered to her, paranoia would occasionally take over. She would quickly inspect herself for any small critter that may have decided to take her up as host. Eventually the sun started to set and it was time to set up camp. Having driven with a friend she was without the security of her own van and bed to sleep in. In their place, the evening stars offered themselves while the moon provided enough light to cast a beautiful silhouette on a tall tree whose leaves rustled with the gentle wind. At dawn the birds awoke singing in choir. Upon opening her eyes the first view was of the tree which she had fallen asleep to the night before. It was now glistening in all its glory of pink and white flowers. The little songbirds which woke her flew gleefully between its curving branches. She wondered if the ticks that also lived in that tree had the possibility to drop on her while she slept. Without bothering to look, she realized she didn't care and continued to enjoy the morning sunrise. It was a slow paced morning as she was accustomed to years ago. Relax, get dressed, tea, eat. The topic as normal hadn't changed though the area and country had: what problems to see and try. The day was spent as the last; driving the windy roads throughout the Frankenjura keeping pace with Andy who drove ahead leading the way. We toured various areas and blocks and got to understand a bit of the intense climbing history of the area even down to specific boulders and lines. It was a bit sad to see some things closed but considering it takes an hour and a half to drive from the north to the south of the tree laden land, closures can be expected. The area is probably the largest climbing area she had ever been. 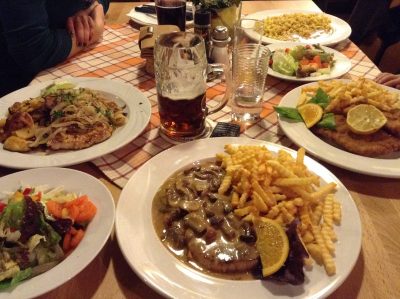 It was now evening and time to go to the place she had wanted most. A local restaurant offering the very special food of the area. She had already experienced such an indulgence before. It aroused feelings of being in front of a table at home, eating mom's dinner. Enjoying Bavarian food in the Frankenjura was indeed a specialty and even more so among friends. The evening passed as the last but instead of sleeping under the stars they slept under dark threatening clouds. Aroused in the middle of the night by rain drops, everyone quickly arose. A shelter from a tarp, a picnic table and some rocks were quickly made and sleep had beckoned again.The next day was as the last and in a way, time stood still. They would leave soon. The rocks would stay; immobile, waiting for the return of some climber who was willing to test their strengths and tenacity on their tiny slick features. The rain had held out a little longer allowing them the privilege t o explore and play. But eventually its threatening demeanor came reality. Minutes upon waking, the rain came in fast. Everyone arose and camp was quickly torn apart; now looking as if it never existed. Despite the fast awakening, the speed of the last couple days continued and leisure was still on their side. With a taste of a life formally considered routine, a fresh outlook was ingrained. Tomorrow the crash pad would return back to the shelf and in her hand would be a power drill and some random hold which she would place in a thought out fashion into a wooden wall. But as spring had arrived, she knew it wouldn't rest there so long. Thoughts of places with raging rivers and gigantic green coniferous raced through her mind. As they drove away from the green field which had renewed in her a sense of will, she waved goodbye through the raindrops. She knew from experience the rain would eventually stop. It was spring and alas, this was just the beginning. Enjoy this post? Please consider donating.