Based on a true story.

Its 2015. We are in Magic Wood, Switzerland. Conor is in Magic Wood too. That’s how we met. Maybe you know him? Conor Houlihan…? It kind of rhymes with hooligan. He was one of a kind. IS one of a kind... As far as I know, he’s alive and well; perhaps walking across Mexico or something of the sort. You see, Conor does those really long walks that cover whole countries sides; the kind that can take weeks, even months to finish.  He travels with a back pack smaller than the one I take climbing which is really quite impressive. 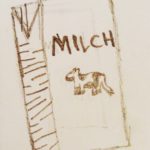 It doesn’t take long before meeting or seeing Conor for he tends to stand out. Conor is one of those really friendly people (he is Irish) that knows virtually everyone at the camp. But it isn’t his height that gets him noticed thou I am sure his long curly locks play a part. Conor is different from most climbers. For one, his climbing shoes aren’t downturned ready for the hardest send. Nor does he wear brightly colored pants. In fact, when it came to climbing, Conor didn’t seem to care. It probably helped that he was new enough to climbing that everything was still ‘fun, beautiful and amazing’. It was as if his mind was permanently set to ‘beginners mind’. But after spending quite a bit of time with this fellow, I began to realize that Conor showed this excitement and passion about virtually everything…

For example, one day, we were roaming the town as one does on rest days and happened upon a local Broki which is a thrift store with proper thrift store prices, (unlike that of Savers or Value village). While exploring the many shelves and racks I found this really nice wool sweater. It was one of those real heavy warm ones that they used to wear in the army. It was made of 100% virgin sheep’s wool and had large rectangular patches on its elbows. It was only 5 francs which is a real steal. It was way too big for me but for Conor, it was perfect. When I showed it to him his eyes twinkled that Irish twinkle and beamed with happiness. He loved it and seemed to wear it every day.

Anyway…  It was one fine September morning at the Bodhi Campground. My daughter Cedar and I were minding our own until ‘knock, knock’, we look up and Conor is at our van. We slide the door open and there he was with a container of milk in his hand. His eyes were light up with a mixture of concern and excitement and he immediately started in on the details. He told us of his morning which started with sitting down to the large wooden table, munching away on his muesli with milk. I immediately interrupted him. ‘Wait Conor- you told me you were vegan, vegans don’t drink milk.’ He replied, ‘Yes thomo, we don’t but it was free. I am a free-gan vegan. Someone left it out last night and put it in the free bin. I don’t like to see things wasted so I took it.’ I nodded without surprise and he continued. 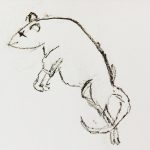 ‘Well, you see, I finished my cereal and walked around camp for a bit. The taste of muesli was so good, that I decided to sit down for another bowl. It’s the swiss kind; full of juicy raisins and chunky nuts. You know the kind right? It’s really good!’ His eyes get larger with pleasure. ‘Anyway, so there I was, sitting at the table with my bowl of muesli in front of me. I grab the milk again and start to pour out the milk. It feels a bit odd but I disregard and continue to enjoy my cereal. Anyway, the milk dries up so I go to grab some more. It is emptier now and I notice that it feels oddly heavy at the bottom... Suddenly, I hear, rather, feel, this plopping around in the container. I don’t know what’s wrong with the milk but I think it’s bad, real bad. I kind of want to puke…’

By this time we are all outside of the van hovering over the container of milk. I ask him if the milk was sealed. Nope. It is a tetra pack variety, no seal on those; no bag covering it. I look at Conor. He doesn’t look well. Conor looks at the box of milk then looks at me with question. ‘Well, should I?’ he asked. Our curiosities are astir. We all nod a sound yes. With the container balancing at the end, Conor extends his long arms as far away ftom him as they can go. He looks at us for support while he pours. We all know what this campground holds and can easily imagine what’s coming. The milk slowly drains out of the container looking white, creamy and rather normal. It eventually becomes a dribble yet the container remains heavy. As it turns fully upside down, something plugs its opening. We all look closer and see a mass of wet, grey matted fur. Conor takes a deep breath, looks away and gives the container a little shake. The thing that falls out has a tail attached to it. 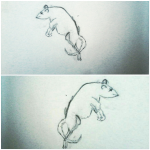 Conor immediately drops the container, and jumps around in repulsion. We look on, completely grossed out, feeling as if we too had drunk the milk. As he circles around the box he says with desperation, ‘it’s still heavy...’ He can’t handle it so Lucas takes hold of the box for him. As far from reach as possible, he shakes the box a little and pours it upside down. Another falls out. Two dead mice.

Lucas does the same as Conor. Putting the box down he squirms away, disgusted at the very thought of what Conor had put into his once vegan body. I look at the box. Dead things don’t gross me out but the idea of drinking milk containing dead things does. The milk box felt heavy in my hands. As I pour, I look at the hole. Again, a dark, grey matt of wet fur plugs its opening.  I shake it loose. Conor was well far away at this point, but looking on with both curiosity and disgust. I look over at him about to give an update but Cedar saved me the words and shouted excitedly, ‘Conor, there’s three dead mice! Not two!’  Shaking the box again, another fell out. She shouted again. ‘Four dead mice Conor! Four!!!’ But it wasn’t over yet. With one last shake, out plopped the last and final mouse. Dead mouse number five. I dropped the box and looked down at the poor innocent lives lost simply for want of milk. I looked up at Conor. He covered his mouth and looked sick. ‘Five Conor. Five…’ 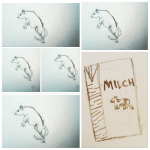 By the time everyone was back from climbing the whole camp was astir about Conor and his mouse milk. It took a few hours for the camp to return to normal. By nightfall, everyone had heard the story. For a while, the mice themselves became part of a science experiment. A daily ritual of curiosities wandered over to the burial grounds to see the five bodies slowly decaying over time. Eventually, they were given a proper burial. As for Conor, he never got sick from the milk laden with five dead mice. We all assumed he had built up such a tolerance over his life’s adventures of living as a true dirt bag that his gut was like that of steel; even mouse cooties couldn’t harm it. He resigned to never drink free milk again and returned to the purities of a vegan life.

Retold with the help of Cedar for memory corrections, and the man himself, Conor Hooligan. Drawings by Cedar.