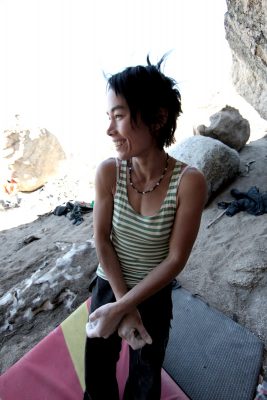 Thomasina is a writer, climber, mother, activist, photographer, coach, and endless wander. Since leaving Newfoundland at age 18, she has been exploring, learning, and ‘nomading’ out of various vans and on different continents for over 20 years.

When introduced to climbing at 24, it didn’t take long for it to consume her every thought and life decision. She has climbed in over 15 countries, became the first Canadian woman to boulder V10, V11, V12, and has since bouldered over 75 problems in this range. On the rare occasion when found on a rope, she has climbed in the 5.13 range. Thomasina has placed 1st (and last) in multiple national and international level bouldering competitions. In her late 30’s, she balanced work, sole parenting, rock climbing, and competition climbing. She was a National Team member for 3-4 years and had her best result of 29th at the IFSC Bouldering World Cup in 2015 at the ripe age of 40. In 2016, a serious shoulder injury forced her out of the game, which is now seen as a blessing in disguise.

Reflective in nature, Thomasina enjoys inquiring into the truth of the matter at hand. Her writing is a collection of stories and thoughts from life on the road, balancing motherhood and passions of climbing; injuries, success, failure, to reflections on past and current events. Her writing has been described as beautifully poetic, compelling, honest, colourful and sharp.

Feeling a deep responsibility for Mother Earth and human rights, Thomasina is a passionate activist for social and environmental justice. She has advocated for simple living, the rights of people who live in vehicles, to climate and environmental action and self responsibility. Through example, she hopes to empower youth and people around her to stand up, speak out, and use their power for the higher good.

Based out of the traditional, ancestral and unceded Sḵwx̱wú7mesh Territory, her home is a 1998 Toyota Sienna Van which she shares with her beautiful 13 year old daughter Cedar who is quickly out climbing and outsmarting her in many ways.

To show your appreciation and to keep this site going, consider a donation the price of a cuppa' tea!

Do NOT follow this link or you will be banned from the site!